Encinitas grows great students, and Don Diego Scholarship Foundation is thrilled to support two of the finest as they prepare to bloom in college and career. Among the 19 exceptional San Diego area recipients sharing $74,500 in 2021 college scholarships are outstanding San Dieguito High School Academy graduates, Alexander Poroy and Elizabeth Hazard. Both idealistic, ambitious Encinitans received scholarships in the Exhibitor/Participant category. 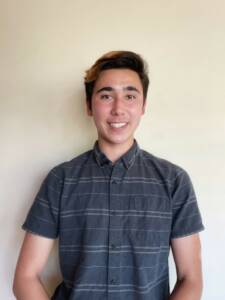 Alexander Poroy won the category’s top $5,000 Gerry & Jeannie Ranglas Scholarship, which he will use to major in Business Administration or Economics. He is considering his options in regard to which university to attend and course of study to pursue, but is laser-focused on his ultimate goal: “To earn an MBA and fulfill the potential that businesses have to change the world for the better.”

Alexander’s connection to the San Diego County Fair runs deep; in fact, both his parents worked there as young adults. He relates, “The Fair has been a place where life milestones occurred. I went on my first roller coaster, got my first taste of adult freedom [being allowed to enjoy the day with friends sans parents], went to my first concert, and even had soft serve for the first time. The experience that impacted my life the greatest, related to the Fair, was entering a set of plans into the Architectural Design Student Showcase.” A freshman at the time, Alexander captured first place! He recalls, “The process showed me what it feels like to be passionate about a project.”

That award is among numerous honors and accolades Alexander has accumulated. One SDA instructor said, “His intellectual depth in unsurpassed … his score of 5 on the AP U.S. History exam came as no surprise.” He attained a 4.56 GPA at this high-performing school, was an officer in the SDA National Honor Society and an active member of the Japanese Honor Society as well as the varsity tennis team.

Alexander says that his participation in the Meaningful Entrepreneurship Program was transformational. “I spent two weeks on a team prototyping business solutions to COVID-19 and pitching our ideas to angel investors,” he reports, adding that he wants to combine his business-related goals with sailing around the world in a self-sufficient catamaran. Brimming with enthusiasm, Alexander says, “I cannot wait to start my undergraduate education so I can begin pursuing an MBA, advising social ventures and seeing as much of the world while negatively impacting it the least.”

This enterprising young man who innovated and fulfilled a social media position at an Encinitas car dealership also intends to someday put his architectural acumen to constructive use building his own custom home!

Elizabeth Hazard won the Exhibitor/Participant category’s second highest award. Her $2,500 scholarship will support her Fish/Wildlife/Conservation Biology studies at Colorado State University. Ultimately, she says, “I want to give back to the natural world and repay all the happiness it has brought me by working for the National Park Service to manage endangered species and educate the public about the importance of protecting natural areas. It is hard to care about preserving wildlands unless you have seen them,” she sagely opines.

Family road trips – including an awe-inspiring dawn at Yellowstone “listening to the soul-wrenching howl of a wolf” – motivated Elizabeth to share her passion for the environment by hosting camping trips throughout high school “for people who had never set up a tent or seen the Milky Way on a clear desert night.”

Lauded by an SDA educator as “a singularly self-motivated young woman” while achieving a 4.25 GPA, participating in extra-curricular activities, and serving in paid and volunteer docent and habitat positions, Elizabeth founded her school’s California Native Plant Club as a freshman and quickly grew it to 22 members. She shepherded the team to design and create a landscape display garden at the Fair. As the group’s chief designer attending her initial Paul Ecke Jr. Garden Show meeting, she recalls, “I realized I was the only teenager present!” The huge success of the project resulted in a native plant garden installation at the San Dieguito Heritage Museum.

In addition to enjoying the intrinsic rewards of participation in native plant gardens, Elizabeth says, “My experience has also led several of my club members to pursue majors in the natural sciences. It is hard to overstate the impact the Garden Show has had on us. It has helped us realize what we wish to do with our lives.” Supported by a Don Diego scholarship, Elizabeth’s motivation will certainly grow to fruition as she fulfills her promise: “to continue inspiring people to protect the natural world.”

Fellow Encinitan and longtime Board member/Chair Emeritus Paul Ecke III states, “Providing scholarships to incredible, deserving students who are intent on building a better community and a better world is what our Foundation is all about.”