Legacy of Love Begins on Track 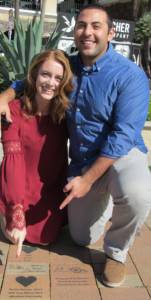 Del Mar, CA … The odds-on favorite at the Del Mar Racetrack on November 18, 2017 was not a horse, but a young San Marcos couple deeply in love. On this warm and sunny, picture-perfect morning, romance was in the air … and at the Don Diego Legacy Brick Fountain at the Del Mar Fairgrounds.

Michael Pettinato, 26, orchestrated his marriage proposal to perfection. First he purchased and customized a brick with a heart inscribed: “Katie Brown, 2017: Will You Marry Me? –Michael Pettinato.” Then he invited their families to “hide” above the Fountain where, promptly at 11:30 am, he entered the Del Mar Thoroughbred Club Stretch Run Gate with Katie, fibbing that he wanted to show her a Don Diego Legacy Brick his mother had bought for installation at the Fountain. Michael led Katie to the spot, unveiled the brick, got down on one knee, popped open up a jewelry box to reveal a gorgeous engagement ring, and popped the question: “Katie: will you marry me?”

Astonished to tears, Katie Brown, 25, screamed, “YES!” As they embraced and kissed, their families cheered. Even race fans walking by who typically would be buried in betting odds applauded and extended their good wishes to the ecstatic couple. The Del Mar Thoroughbred Club graciously hosted the entire Pettinato and Brown families for an afternoon they will not soon forget.

Once Katie caught her breath, the bride-to-be confided, “I’ve been hoping Michael would ask me to marry him. This very morning, I had a weird feeling and thought, ‘Wouldn’t it be cool if he proposed at the track?’ But I had no idea he actually would!”

Michael said that a couple years ago, he had come to the track and was impressed by the Fountain’s many bricks celebrating memorable moments and special people. “I read the inscriptions and thought wow, great idea – installing a personalized brick in a beautiful place – it’s something that will last forever.”

Don Diego Legacy Bricks begin at $150. Each Brick purchase is a donation that enables the Foundation to build a better San Diego, one scholarship at a time. The Don Diego Scholarship Foundation was named for Don Diego, AKA Tom Hernandez, who served as the Fair’s welcoming goodwill ambassador from 1947-1984. Since its inception in 1986, the Foundation has awarded approximately $862,000 in scholarships to 204 students and in agriculture education grants. Brick purchases and more information are at dondiegoscholarship.org.