Jon Liss elected Chairman of the Don Diego Board 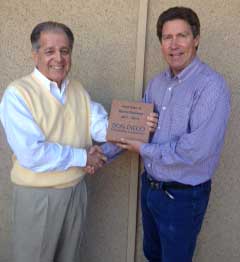 Ecke will continue his active participation on the Board, which also is mourning the loss of founder Robert (Bob) Spanjian, who died on February 18, 2016.

In honor of Ecke’s longtime efforts on behalf of the Foundation, incoming Chair Liss presented outgoing Chair Ecke with a Legacy Brick that will be permanently enshrined at the Don Diego Legacy Brick Fountain in the Plaza de Mexico at the Del Mar Fairgrounds.

The Don Diego Scholarship Foundation was named for Don Diego, AKA Tom Hernandez, who served as the Fair’s welcoming goodwill ambassador from 1947-1984. The Foundation has awarded $572,500 to 165 aspiring students since its inception in 1986. It also awards grants that support the Fair’s Plant*Grow*Eat program, which teaches elementary students about agriculture and nutrition in a fun, hands-on way. More information is at dondiegoscholarship.org and www.facebook.com/DonDiegoScholarship.

In 2016, a total of $44,000 in college scholarships will be awarded to graduating high school seniors throughout San Diego County. Online applications, which are due on March 21, 2016, are at https://dondiegoscholarship.org/scholarships/