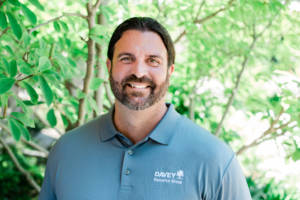 As an avid 4-H kid growing up in Lakeside, Vince Mikulanis raised and showed pigeons and goats at the San Diego County and East County Fairs. “Pigeons are intelligent,” Vince explains. “And fast. We’d take them to Poway and let them out. They’d beat us home. Our super-smart goats were also fun to watch.”

After winning a highly competitive $5,000 Don Diego scholarship in 1995, Vince flew the coop to Cal Poly Pomona, then to Humboldt State University, where he earned a B.S. in Forest Conservation.

Returning home to roost in San Diego, Vince joined Davey Resource Group in 2002. He has honored his agricultural roots by progressing to his current position as market manager with a team of 100+ employees in Southern California. He also combines his leadership skills, conservation expertise, and penchant for community involvement by serving as San Diego Regional Urban Forests Council’s communications officer, and being involved in other civic and industry organizations.

“The scholarship was very helpful financially; back then, tuition was only $900/year,” Vince recalls. “It also meant a lot to me personally. My grandparents were farmers and ranchers in Kansas, which inspired me down the 4-H path; I started as early as I could and remained until I graduated from high school. I learned the importance of leadership, volunteering and community service. My two sons have not followed in my 4-H footsteps, but they absorbed the lessons I learned and demonstrate these traits in their pursuits. That validates my efforts as a father, just as Don Diego validated my efforts as a student.”