Get Your Bid On: Don Diego’s Online Auction Runs Through July 4, 2016 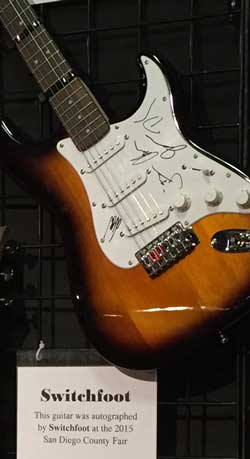 Guitars autographed by San Diego County Fair Grandstand performers help to raise money for scholarships. This guitar was signed in 2015 by Switchfoot, an internationally known band that got its start here in San Diego County.

Del Mar, CA …    It’s time to get your bid on! Don Diego Scholarship Foundation’s Online Auction of autographed guitars and other signed collectibles has opened at
at dondiegoscholarship.org. The bidding closes July 4, 2016 at 12 am PDT.

Among the iconic items offered are guitars autographed by Stars of the 2014 and the 2015 San Diego County Fair Grandstand as well as guitars signed by great groups and individual performers such as Darius Rucker and Adam Lambert. Other one-of-a-kind collectibles will be added as the auction continues. Each offers a buy-it-now option.

Don Diego Executive Director Chana Mannen says, “When you win the bid of a guitar signed by a legendary musician, your donation will be music to the ears of future scholarship recipients.”

The Don Diego Scholarship Foundation was named for Don Diego, AKA Tom Hernandez, who served as the Fair’s welcoming goodwill ambassador from 1947-1984.
Since its inception in 1986, the Foundation has awarded approximately $797,000 in scholarships to 177 students and in agriculture education grants. Information on Don Diego’s history and the Foundation’s current programs and donation opportunities is at dondiegoscholarship.org and www.facebook.com/DonDiegoScholarship.