Del Mar, CA … Summer started one day early at the San Diego County Fair’s June 20, 2019 Plant*Grow*Eat Day when hundreds of bright-eyed elementary students bearing their carefully nurtured edible plants descended from buses to the Infield Farm. Awaiting them were some of the many generous Don Diego Scholarship Foundation donors who sponsored buses so these enthusiastic young farmers could earn well-deserved ribbons and enjoy a memorable agriculture adventure at the Fair.

This year, the generosity of longtime and inaugural group and individual bus sponsors enabled Don Diego to provide 89 buses transporting 4,000+ students from Title 1 schools throughout San Diego County to the Fair on designated Plant*Grow*Eat days. 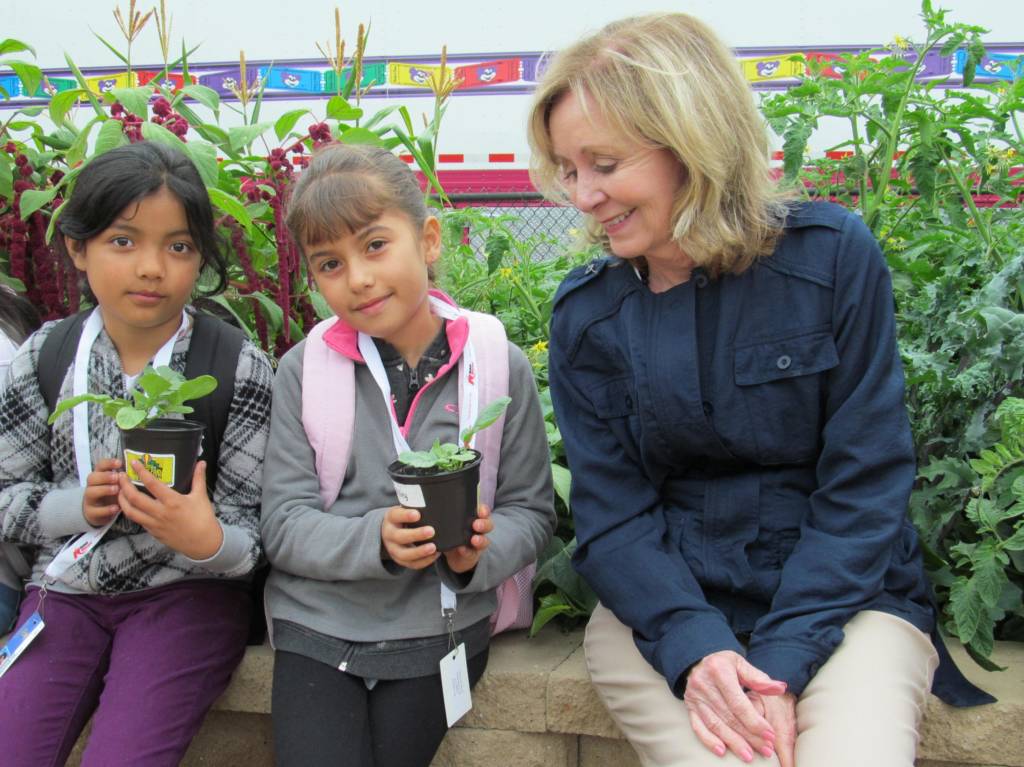 Multiple-year sponsors returning this year included the Del Mar Foundation, Del Mar Kiwanis, Les Dames de Escoffier, SDG&E and other organizations as well as individuals such as Brenda Larson who say they are passionate about the program.

Among the new sponsors were eight members of the Village Garden Club of La Jolla. Garden Club Member Margaret Anne Lozuk revealed, “As a San Marcos Unified School District teacher, I brought my classes here. I’ve also served as a Plant*Grow*Eat judge. That was really fun! When I learned of the bus sponsorship opportunity at a Village Garden Club of La Jolla meeting, I was happy to hear that the Club itself was a sponsor. I immediately resolved, ‘This is something I also want to do on my own as a way to give back.’ I’m so glad I sponsored a bus and I’m glad to be here with the kids.”

Don Diego Executive Director Chana Mannen, who created Plant*Grow*Eat decades ago when she served as Deputy Manager of the Fair, happily reports, “The program, which was a hit with schools and children right from the start, has continued to grow in popularity. This year, we had to turn away volunteer judges because we had filled all the slots. Of course,” she adds with a smile, “we never turn away donors!”

The Don Diego Scholarship Foundation was named for Don Diego, AKA Tom Hernandez, who served as the Fair’s welcoming goodwill ambassador from 1947-1984. To date since its inception in 1986, the Foundation has awarded approximately $1,040,000 in scholarships to 257 students and in agriculture education grants. More information is at dondiegoscholarship.org.