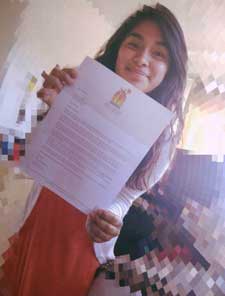 Yessica Vargas Navarro, who received two $5,000 scholarships from the Don Diego Scholarship Foundation, with the letter informing her she is the 2016 top recipient.

Future agricultural educators and entrepreneurs, engineers, artists, physicians and leaders in diverse other fields will begin working toward their career goals by embarking upon college studies this fall, supported by scholarships ranging from $1,000 to $10,000 from the Don Diego Scholarship Foundation.

The 12 recipients hail from throughout San Diego County, come from varied backgrounds and have an amazing array of talents, skills and interests. According to Don Diego Chair Jon Liss, “All share key traits: they are without a doubt among the most authentic, idealistic, dedicated, intelligent, ambitious and selfless young adults in our area. We are confident that each will attain success, give back to their community, and help build a better San Diego and a better world.”

Recipients will be recognized at Don Diego’s exclusive Dinner and Concert Gala on June 30, 2016 at the Fair. Tickets are available at dondiegoscholarship.org and include all-day preferred parking, hosted cocktails, gourmet dinner, silent auction, and an opportunity to meet the recipients and mingle with a who’s who of San Diego society. The Gala culminates in elite seating for “Brian Wilson presents ‘Pet Sounds: Celebrating the 50th Anniversary’ with special guests Al Jardine and Blondie Chaplin.”

The top scholarship was won by Vista High’s Yessica Vargas Navarro, who by unanimous vote received both the $5,000 FFA scholarship and special $5,000 Spanjian Family scholarship. Yessica plans to attend Cal State San Marcos on her way toward earning a teaching credential and a master’s degree in Agriculture Business. She says, “I am truly blessed to have been awarded these scholarships; the money will change my entire university experience. I realized my passion for teaching by helping struggling migrant education program students. I am thankful for all who helped me along the way and I am eager to give back to my community.”

One of nine children, this nearly 4.0 GPA student is a leader who has overcome extreme financial hardship to excel. Vista Unified School District Superintendent Devin Vodicka, Ed.D., believes, “Yessica is an amazing student with a very bright future.” Vista High FFA Advisor Sara Benner says, “Yessica’s exceptional character, dedication, resilience and perseverance enabled her to get where she is today.” AFJROTC Instructor, Colonel Vincent Lostetter, Jr., concurs, stating, “This young woman exemplifies the exceptional character our country thirsts for in our leaders.”

Ramona High’s Carney Jo Flinn will major in Physical Sciences at UCLA, supported by a Don Diego $5,000 4-H scholarship. She graduates second in a class of 347; captained her swim and water polo teams; was a two-time, UT San Diego Star Athlete; and four-year member of the National Honor Society. Among her most amazing accomplishments, Carney overcame an intense fear of heights with her powerful sense of self. Revealing, “I know that a fearful me also has the power to be the strongest me,” Carney declares, “Some view me as a person with a disability. I view myself as someone with a few more obstacles to pass through.” According to her many fans, Carney doesn’t just “pass through” obstacles; she leaps over them. Swim Coach Jolyn Yañez states, “Carney is tremendously goal-driven and demonstrates the highest level of integrity.”

Renaissance man Ryan Berardelli will attend California Baptist University with a $5,000 Exhibitor scholarship and a wealth of intellectualism, drive, and real-world experiences from robotics to jewelry-making. He’s an Eagle Scout and a successful entrepreneur with a thriving photography business. Home-schooled in San Diego, Ryan is an A student who has conquered demanding subjects such as Latin and higher math while pursuing college-level coursework. Poway High instructor Rodger Matthew Dohm has been impressed by Ryan’s robotics team and Boy Scout efforts, saying, “Ryan is self-motivated and motivates others through his determination to see things through.” Ryan intends to be a mechanical engineer and discover “new ways to increase the quality of life around the world.”

UCSD is the fortunate university acquiring $5,000 Employee recipient Sofia Davis, a Torrey Pines High standout who plans to major in Global Health and become a pediatrician. She says interning at Palomar Medical Center has been “one of the most educational and amazing experiences of my life.” Sofia earned a 4.30 GPA, amassed diverse academic honors and awed her instructors. Teacher Colin Cornforth calls her “intellectually gifted, witty and eager.” Principal Lindsey Olson praises her “maturity, motivation and potential.” The exuberant Sofia says that her ice cream stand job at the Fair not only strengthened her skills but gave her a chance to enjoy her favorite food: “I had so much fun; the paycheck was just an added bonus!” Noting that the work made her eligible for the scholarship, she says, “Thank you, Don Diego community, for this amazing opportunity!”

Sugarman has received a U.S. Congressional Award for Public Service. Jin is a USC Presidential Scholar.

Liss notes, “2016 marks our 30th anniversary. The Foundation began modestly in 1986 by awarding $1,000 scholarships to each of three students. It’s amazing how far we’ve come over the past three decades and how far our past scholarship recipients have gone. We’re certain that our Class of 2016 will continue this rich tradition.”

The Don Diego Scholarship Foundation was named for Don Diego, AKA Tom Hernandez, who served as the Fair’s welcoming goodwill ambassador from 1947-1984.

Since its inception in 1986, the Foundation has awarded approximately $797,000 in scholarships to 177 students and in agriculture education grants. Information on Don Diego’s history and the Foundation’s current programs and donation opportunities is at dondiegoscholarship.org and www.facebook.com/DonDiegoScholarship.