The Tulloch clan’s agricultural roots in San Diego run as deep as the 70-foot well hand-dug by their Sawday ancestors who settled on the Ramona property more than 100 years ago, making it symbolic that Don Diego Scholarship Foundation’s first matching named scholarship is the William (Bill) and Elizabeth (Betty Ann) Tulloch Family Scholarship.

Don Diego Board member Glenn Drown, Bill and Betty Ann’s son-in-law, pledged $25,000 at the June 2019 Gala, when for one historic evening the Foundation matched each pledge two-for-one; thus creating a $75,000 named scholarship. The inaugural award is a $3,000 Junior Livestock Auction 2020 college scholarship. 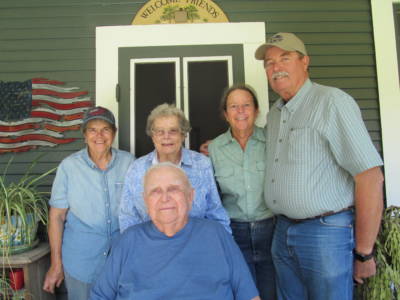 Bill, 93, and Betty Ann, 88, were not at the Gala that evening, but were well represented by family members, most of whom have been involved with cattle ranching, 4-H, FFA, farm organizations and the San Diego County Fair their entire lives. The couple learned of the honor from Glenn and his wife Margaret at their charming, century-old family ranch, where the Butterfield Stage once traversed and where today eagles still soar, deer and puma roam, and cattle graze.

The home is adorned with vintage treasures such as handcrafted quilts, leather cowbells and a restored stained glass window from a old, shuttered church. Outside, 200 head of cattle speak to a way of life that many people think has disappeared in San Diego but is very much alive here in the backcountry.

In 1849, one year before California became a state, London merchant Fredrick Sawday was born. In the late 1870s, he and his wife Sarah emigrated to the Julian area, where they homesteaded 320 acres and opened a general merchandise store. In 1904, eldest son George married Emily Crouch, whose Australian-born father ran sheep. They moved to the Sawday home at Witch Creek, where George established the legendary land and cattle empire that stretched from the Riverside County line to Mexico.

It was here that granddaughter Betty Ann (Sawday) Cummings met cowboy Bill Tulloch, who worked for the family. Their marriage yielded four children: Janet, Margaret, Ben and Lucy. Some of these kids and their own children continue the family ranching tradition.

Bill and Betty Ann Tulloch have devoted their lives to promoting agricultural endeavors. Bill held leadership positions in the San Diego branch of the California Cattlemen’s Association, San Diego Farm Bureau and 22nd District Agriculture Association Board, which presents the annual San Diego County Fair. Not one to sit quietly in the background, Betty Ann created the Cow Belles group of women working to further the efforts of what was originally an all-male cattlemen’s organization.

Betty Ann ebulliently declares, “In addition to running our cattle business, raising our family and maintaining a home out here when there were few amenities such as a steady supply of water (thus, the well), Bill and I worked hard to educate people about where their food comes from and of course to promote beef. The Cow Belles had a booth at the Fair. We’d cook beef and hand out samples and recipes of delicious pot roast. It was a lot of work, but a lot of fun.”

That observation – a lot of work but a lot of fun – sums up their lives, believes Don Diego Executive Director Chana Mannen. She says, “We are beyond pleased that our first matching named scholarship honors Bill and Betty Ann. The Tullochs are the epitome of everything that is good about the Fair and about San Diego. They’ve made a livelihood in ranching; provided animals to FFA and 4-H kids; taught their children to be good stewards of the land; given back to their community; and educated thousands of Fairgoers about the importance of sustainable agriculture.”

While harking back to the early 1900s, the Tulloch family legacy continues to propel forward. Glenn and Margaret Drown’s daughter, Sarah, captured the top Don Diego college scholarship in 2017. She is double-majoring in Agriculture Communications and Agriculture Business at Oklahoma State University. Another granddaughter, Lindsey Tulloch, received the $5,000 FFA scholarship in 2005. She went on to earn a Bachelor’s degree in Agriculture Systems Management from Cal Poly San Luis Obispo.

Mannen says, “Sarah’s and Lindsey’s great-great grandfather, George Sawday, would be proud. So are we!”

The Don Diego Scholarship Foundation was named for Don Diego, AKA Tom Hernandez, who served as the Fair’s welcoming goodwill ambassador from 1947-1984

To date since its inception in 1986, the Foundation has awarded approximately $1,040,000 in scholarships to 257 students and in agriculture education grants, and is eagerly looking forward to raising its second million. More information is at dondiegoscholarship.org.